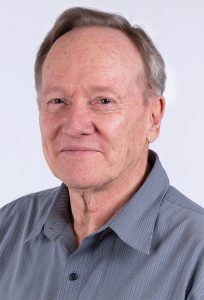 Born in Australia, Gordon Arnold emigrated to the United States in 1962 where his family settled in California.  He became a US citizen and served in Vietnam with the Army’s 1st Infantry Division.  He received a BS in Business Administration from San Jose State University and has been married to Isabel for 45 years.

Gordon began his business career in the semiconductor industry where he focused on logistics, manufacturing and quality. He co-founded Sierra Monitor in 1979 and became President and CEO in 1984.  He has also served the company as Secretary, Chief Accounting Officer and Chairman of the Board.  He transitioned to Executive Chairman in 2014 as he moves toward retirement.

Mr. Arnold led or participated in the product development teams for three generations of gas detection products; three generations of controllers–including the 1980’s early digital systems and first generation graphical interface deployment; environment controllers for the telecommunications industry underground vaults; gas detection systems which are deployed on every ship in the US Navy; and three generations of communications gateways.  He has developed and trained domestic and international sales teams.  Gordon is most proud of his partnership with the employees of Sierra Monitor where employees from 11 different countries work together in harmony AND half of the employees have over 10 years of service–nine of them with over 30 years.  He also takes pride that all their products are manufactured in the United States and many are still in operation after 30 years.  Gordon Arnold has a unique ability to understand cultures and to foster good international relationships–having provided sales and product support in 27 countries and traveled to 64 countries.  He believes that corporations only survive when they satisfy their customers, their employees and their shareholders.

Sierra Monitor Corporation has been a member of MCAA since 1990 and Gordon began attending MCAA meetings in 2001.  He became a member of the Board of Directors in 2003 and served as Chairman in 2006.  As a Board member, and particularly as Chairman, he made many contributions to the organization including changes to the dues structure which lead to significant increases in attendance at the Industry Forum.  He has been an early and strong supporter of the Association’s Customer Satisfaction Survey.  Additionally, he was an early supporter of the Sales Training program and helped review the Chemical Industry syllabus which is part of the Industry Applications segment of that training program.  He has supported and participated in efforts to make the OSHA NRTL Product Approval Process more effective while still maintaining product safety standards.

MCAA inducted Gordon Arnold into its first Hall of Fame class in April 2016 in Nashville, TN.