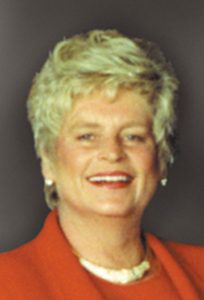 Awarded Posthumously
1937-2010
Chairman of the Board, Magnetrol International

Born in 1937 to 4th generation Naperville, IL parents, Judy Stevenson spent her formative years in what was then a small town west of Chicago where her father provided insurance to many of the newest residents.  Her father’s business acumen rubbed off and Judy gained the forward thinking that would play a role in support not only of community but with a business that remained close to her heart for more than 40 years.  But her start was quite a different picture:  A family rule of “you must play the piano” led to her enrollment in piano lessons at North Central College.  Her musical career was brilliant and she devoted herself to the clarinet, cello, chorus, band and orchestra while attending Naperville Community High School and continuing to North Central College where she studied voice and piano.  She sang for two years with the Robert Shaw Chorale and performed with the Chicago Lyric Opera.  But this was not the life-direction Judy Stevenson took.

In 1964 she joined Magnetrol–then Schaub Engineering Company–as a part-time bookkeeper.  In her first year of employment, she rose to accounting supervisor, then to accounting manager a year later.  In 1967 she was promoted to treasurer and administrative vice president.  She became president of the company in 1975 and in 1978–14 years after beginning in a part-time clerical position–Judy bought the company.

Under her leadership, Magnetrol has prospered due to an aggressive commitment to research and development, new products, new technologies, training and progressive and creative thinking.  Today Magnetrol is a multi-million dollar company with over 800 associates at offices and manufacturing facilities worldwide. The company also attributes its success to its people-oriented culture and strong emphasis on the family–a reflection on Judy’s own beliefs.  Her ability to remember the names of employees as well as their children always made them feel they made a difference.

Judy established and endowed 11 college scholarships, six of which are awarded annually to the children of Magnetrol associates. She supported numerous local community programs and charities.  She received many awards and recognitions for local business achievements, especially focused on women-owned businesses, including being recognized as one of the Top 500 Women-Owned Businesses in the country in 1998.  Judy died at the age of 72 in 2010.